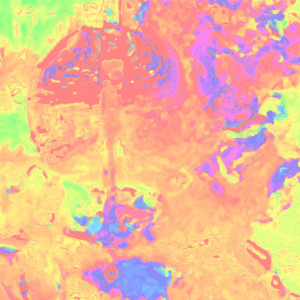 Even the best beat collections — the ones that bring to mind the glory days of Brainfeeder or just sound like they need to fall into the right rapper’s hands for some real magic — feel like digital space on a site such as Bandcamp. Maybe because the style always feels like an imitation of past triumphs, or just because skittery cosmic beats have gone in so many exciting directions (and been adopted by so many big-name acts) that a simple instrumental set isn’t all that exciting. Thank goodness for something weird like Otomoni’s Atami, which isn’t a beat collection per se as much as a set of abstract goofing around. But the beat itself is vital to these songs, from the garbled crunch of “Train Train” to the off-kilter snaps on the brief “Fun Faun.” Above all else — Otomoni makes me think about the music itself, rather than getting me daydreaming about how it could be used elsewhere. Get it here, or listen below.