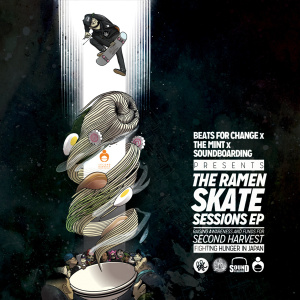 So two prominent skateboard brands based out of Osaka (The Mint and Soundboarding) have teamed up with Vancouver-based outfit Beats For Change to release a Japan-centric compilation raising funds for the Japanese non-profit organization Second Harvest. All proceeds go to the group, and the comp features a bunch of producers from all over the world. In terms of “things one can fork money over,” this one seems solid enough. Hey, good causes!

The news hook for this blog, though, is that there are a few Japanese producers on it, including the always-up-to-something Bugseed. Yet what really interests us around here is a track from MFP, an Osaka producer who was one of the founding names over at INNIT…which soon after grew into the source for a whole bunch of exciting developments in the Japanese music scene. So go check it out over here.