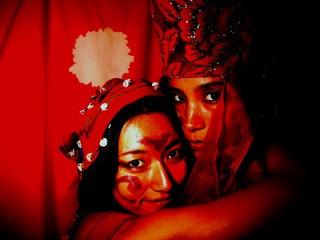 Sonic Youth and Lightning Bolt buds Afrirampo just released a new album in Japan, most likely loaded with the duo’s usual songcraft consisting of loud guitars, loud drums and some screaming. WE ARE UCHU NO KO came out a couple weeks ago, and alongside its kicking-and-screaming birth was a video for lead track “Miracle Lucky Girls.” The song manages to be both less and more chaotic than expected – things seem organized enough early on, a big dumb nearly metal guitar riff steamrolling down the middle of the track before changing a little bit for the, uh, “chorus.” Yet Afrirampo keep everything weird courtesy of the vocals which, as the video hints at, sound like the two members pushing one another around to get to the mic in order to scream out nonsense. Oh, and don’t forget the screaming solo late in the song. All in all, a great bit of chaotic Afrirampo rock, complete with a video loaded up with glitter and weirdo celestial figures. Watch it below.