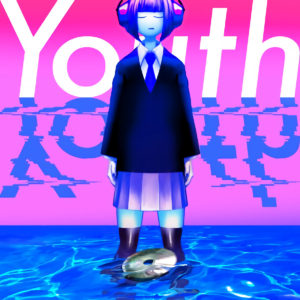 In general, the longer a trend lasts, the more exposure to it is likely to make listeners hesitant. Which is to say…the opening notes of Leave E’s Youth, full of bubbly synth building up to a big, bass-centric drop, made me think “here we go again.” This style, which you could call “future bass” bordering on the “kawaii bass” side, has been constant over the last three years now, and some of the thrill is gone, at least when it comes to that rush of hearing something you just did not expect for the first time.

But then I thought about it a bit…”is it really that big a deal?” It’s not like half the rock bands around the world aren’t more or less doing the same thing (and really, you could toss this at any genre). Yeah, the sounds on Youth are familiar, but Leave E does so much good stuff with them. The title track features all sorts of finicky zigs and zags, and that cheery synthesizer line that burbles up feels like rays of sun after all the tossing and turning. Even better is “Cloudy Lights,” a tempo-bending number that features the album’s most emotionally rich center, with sped-up vocal samples and big synth flare up (leading to an especially burbly drop). Not everything hits — Leave E might fare better just using samples, as the number “Pale Blue” feels off with a guest vocalist — but for the most part Youth is an all-around solid set of dance music, as long as you are OK hearing familiar elements being played with in slightly new ways. Get it here, or listen below.