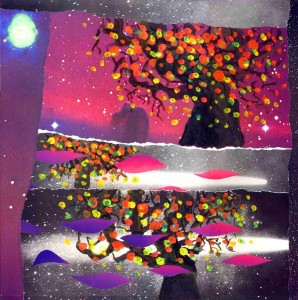 Look, it is far from perfect – no compilation with 41 tracks from 41 different producers can go perfect – but the eighth edition in the Fogpak series comes off as particularly strong, esepcially compared to the more hit-or-miss recent entries. This series, which gathers new music from electronic producers all over Japan (and, sometimes, the world), has always been loaded with good stuff, but Fogpak #8 is a consistently good listen that takes all sorts of great stylistic turns over the course of its (very long) running time. Especially striking are the first handful of songs contained here – kuuya opens the comp with plaintative piano before introducing skittering beats and a chopped vocal sample (note those two sonic details, they are the bedrock for a lot of the artists popping up here), and the producer plays around with both…before launching into a juke-inspired bit. In The Blue Shirt delivers a jolly cut-and-slicer of his own with “Slight Intoxication,” before PinokioMachine and YYIOYoffer up hyperactive numbers of their own (the latter turns an Utada song into a Jersey club banger). And soon enough, if all the ratcheted-up energy wore you down, Liquid Sunshine comes in with a lithe mover all his own, full of splaying synths.

Many producers here create songs featuring split-second vocal samples and rapid-fire music, but what’s impressive is that none of it ever sounds derivative, many of the artists here finding ways to put their own stamp on the style (some highlights: Akoustik Shadow’s luxurious approach, Firedrill’s swirly “Id,” PNDR PSLY’s long-distance “Loverproof”). Other notables – Foodman gives us a barely-there track, while Waver Friends indulges in some borderline vapor funk. And maybe the biggest surprise guest of all comes on Ulzzang Pistol’s contribution to Fogpak, wherein he uses the voice of Hatsune Miku to create a dizzy little love song that might as well be set in space. Definitely a must get. Listen below, or get it here.