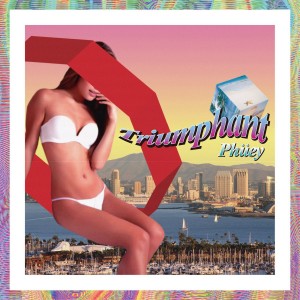 Yesterday Once More is a relatively new label based out of Fukuoka – they’ve been around for a year now, and so far they’ve been exploring contemporary dance music (think Jersey Club, trap, that sort of style for the most part). The very first release that imprint released, Shigge’s so-much-more-than-a-beat-tape Naughty, wowed us, and since then various producers associated with Yesterday Once More have contributed to various compilations such as FOGPAK. One has been Phuey (sorry two dots over the “u”), and that creator has a new collection called Triumphant which is very worth your time. One thing that has separated Yesterday Once More artists thus far have been their willingness to wriggle around convention – yeah, parts of Triumphant sound “trap,” but Phuey is not aiming for the conventional. “LYF” features dry-snapping beat programming and chanted backing vocals, elements that pop up in all sort of TNGHT imitators – yet he uses those to construct the album’s most sparse number, one where all the attention really ends up focused on the sweet coos running over the rumble-tumble sounds. “1Chance” and “Freakinbae” similarly take cues from Jersey Club music…and exist closer to what one imagines a “Jersey Club song” to sound like…but they construct driving numbers with nice twists (the prior starts off as an energetic bouncer, but flips into a menacing come down). Get it here, or listen below.