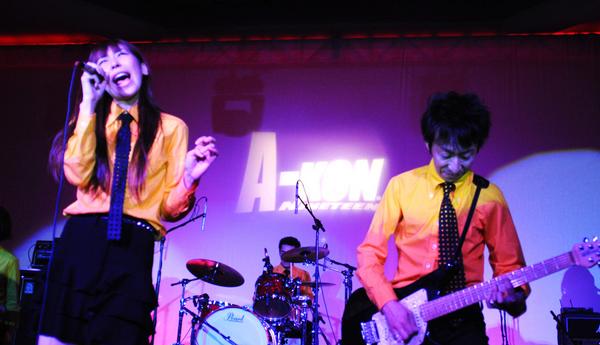 Recall the “comedy club” bits on the sitcom Seinfeld for a second. What sticks out from these scenes? I doubt it was whatever topic Jerry Seinfeld tackled at the start of whichever episode, but rather the iconic slap-bass music accompanying said moments. Even the best gags (which, to be fair, rarely came out during that part of the show) can get overshadowed by a catchy sound. Even if you want to take a drill to your brain to forget about those “bow-bow-bowbow” slaps.

Budo Grape’s “Sushi Ya Sushi Ya” plays like one long joke or a heck of a tribute to the most internationally recognized Japanese foodstuff. Most likely the former, as even the lead singers can’t stop from laughing midway through. “Sushi Ya” finds the band listing off various types of sushi (ebi, negitoro, California Roll) in truly Deerhoofian simple-speak. So yes…an undeniable comedy track bordering on the absurd bordering on viral marketing for some sort of shadow sushi group.

The “joke” may not be more thought out than reading off an online menu, but Budo Grape did spend some serious time making sure “Sushi Ya” sounded catchy. This song’s stupidly catchy…the guitar playing remains simple but stumbles on such a simple-but-great riff it’s hard to shake off even after the repeated cries of “tomago” leave. Credit also goes to those ripples-in-water keyboard flashes and the childlike percussion, small details making the whole sound of “Sushi Ya” even more absorbing. Just like Seinfeld (or, more accurately, a bad impression of Seinfeld), Budo Grape take a routine basically zeroing on some thing (“what’s the deal with airline food/sushi?”) and makes it memorable thanks to smart musical choices. All without slap bass, too.