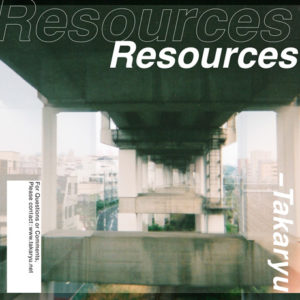 Producer Takaryu’s first full-length album Resources doubles as a snapshot of the many ways electronic music in Japan has gone over the last five years. Takaryu has been around since about 2014, though the bulk of work they’ve shared in that time has been remixes alongside one mini-album. So Resources gathers songs that have appeared over the last few years alongside new ones, partially explaining the mish-mash of sound. There’s fidgety IDM intersecting with filtered singing on “Null (version)” and straight hip-hop beats (“Relationships/Reprise” and “Rain”), with fidgety future bass even popping up via “Refusal.” Takaryu works wonders when guest vocalists appear on his tracks. My gateway into this album was the appearance of Megumi Wata, an artist I hadn’t heard from in quite some time. The album peaks a little early with the dizzying “Left-field,” a number that makes great use of Wata’s slower delivery…and isn’t afraid to warp it into something totally different come the hook. “Static Thought” leans closer to Wata’s own releases, featuring a sparse backdrop for her to deliver her sing-speak. Nobody quite matches her style, but Annabel adds a nice pop to the springy title track, while Evo+ brings energy to the 808-centered “F.W.P.” Listen on your preferred streaming service, or check some samples below.