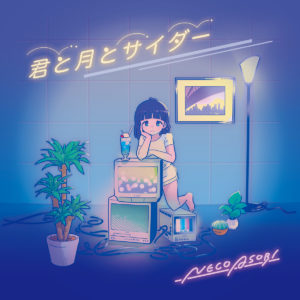 No group has been more influential this decade than Sotaisei Riron. That outfit’s mix of Showa-derived pop melodies and lead singer Etsuko Yakushimaru’s surreal sing-speak ended up leaving a mark on pop and rock in Japan across the past ten years, ranging from out-right imitation to blueprints towards the mainstream to stranger creations.

If you need to see just how far down that group’s impact has gone, the latest from extremely-online label Local Visions tells the stories. Utsunomiya’s Neco Asobi channels the group on Kimi To Tsuki To Cider’s two songs (even the title!). The title track boasts a slick guitar melody halfway between city pop and Weather Channel, given a buzz by some electronic touches. And then comes Neco Asobi’s singing, closer to talking and loaded with references to the internet and shoegaze — a snapshot of a life. “Discover” adds a sturdier beat for her to sing over, while still retaining that night-drive pacing. Rounded out by two solid remixes that push “Discover” into more rubbery territory, this brief set isn’t just a bit of musical connect the dots, but a solid release all its own. Get it here, or listen below.