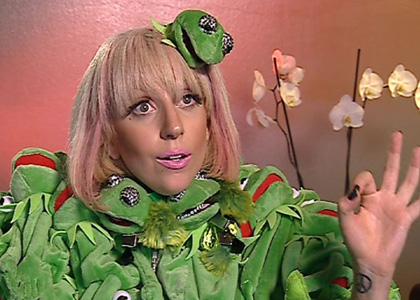 We’re still enjoying the holidays here at Make Believe Melodies this week, but if we find anything neat to pass along we will post it up. Like this!

Remember at the very start of the year when Lady Gaga wasn’t the second coming of Madonna and didn’t dress up in a sea of mini-Kermits? Back then, she was just another pop diva, one trying to capitalize on the still-throbbing electro-dance scene and one who did away with pants. Ahhhh simpler times, when we could walk around on air planes and still admire Tiger Woods.

“Poker Face” marked the moment Gaga made the jump to “pop singer of the year,” the single absolutely smashing the charts. It’s a weird breakthrough moment: whereas her later singles wandered off into stranger pop territory and “Just Dance” at least had some novelty (Gaga channeling Hipster Runoff), “Poker Face” sounded like a complete retread of her first single. Everything about it feels sub-par: the beat, the chorus, even the remixes (looking at you Kid Cudi).

So big props to Hoshina Anniversary, who found a way to make “Poker Face” stand out. He reworks the tune into an electro number, lacing all sorts of Ed Banger-esque digital tones through the song. The electro-cacophony allows the original’s best asset (it’s chorus) to rise up even more on Hoshina’s mix. It’s a completely “electro by numbers” take, but that’s still more than enough to dress up an otherwise meh pop song. Listen to it (and a spaced-out take on “Just Dance”) over here.

← Review: √thumm’s Coton
Sweet Vacation Cover Ne-Yo: “Because Of You” →