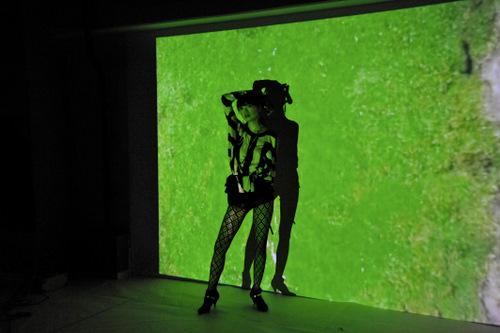 Considering the two people performing live as HNC Saturday night at Flake Records in Osaka also make up the twee-crunk duo Love And Hates, I went into the (free!) show expecting the same sort of goofy chaos I’d witnessed several months ago. Color me surprised: HNC knows how to keep their alter-egos in check, and the two acts couldn’t be more different from one another though they feature the exact same personnel.

HNC (née Hazel Nut Chocolates) usually operates as the solo pop venture of Yuppa, but at this in-store (quick aside: Flake Records is really the best music store in Osaka, stop by) she was joined by Love And Hates partner Miila, whose role was to sing a few backing vocals and hit various things with a drumstick. Her playroom percussion added an offbeat touch to the mostly just-press-play music – the set-list featured nearly the entire first-half of HNC’s break-beat heavy album Cult , so the live renderings sounded nearly identical to their CD counterparts. No complaints there, as the first-half of that CD is really good.

What does standout live is just how off my perception of HNC was. Cult sounds like a well-produced pop record with a slew of random “twee” features splashed on it. Yet in-store, HNC’s music reveals itself as a much more intricate affair. Yuppa, stationed behind a keyboard, isn’t nearly as animated as she is in Love And Hates because she doesn’t have the opportunity to do so – she has to make sure everything fires at the right time, from the beats to the keyboard lines to the seemingly random noises that actually become vital live. The kinda-annoying “meows” dotting “Kitten’s Breaks” become kinda charming after seeing Yuppa painstakingly make sure each cat sound goes off at the right time. Even the kazoo playing seemed like a display of excellent musicianship. A clear distinction between an “HNC tune” and a “Love And Hates” tune quickly became clear. The prior is a well-oiled pop song borrowing ideas from drum and bass, while the latter is just goofy-as-hell party rap that allows both performers to kick back, have fun and bust out a harmonica rendition of “London Bridge Is Falling Down.” The set ended with a Love And Hates number, and Yuppa stepped away from the keyboard to bounce around like a kid high on Lucky Charms.

So, lessons learned from this (free!) show at Flake Records: HNC is a lot more clever with pop than I initially though, Love And Hates are a fun way for two artists to go a little crazy, and cat sounds can great when witnessed live.

← Hope You Own An 8-Track: No Cars
New 80kidz (Preveiw, That Is): “Spoiled Boy” Featuring Lovefoxx →