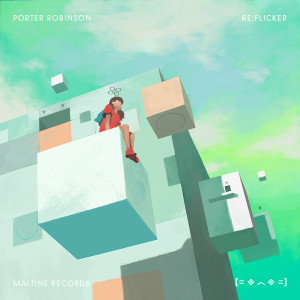 So remember when Tomggg remixed Porter Robinson’s “Flicker,” and transformed it into a twinkly little wonder? Welp, turns out that was part of a bigger project. Maltine Records just released a collection of “Flicker” remixes, including Tomggg’s playroom reworking, all done by Japanese producers. It ranges from relatively straightforward brostep chaos (Bugloud’s jarring take) to Carpainter’s 8-bit-accented two-step. In The Blue Shirt brings in skittery vocal samples to join the already stuttering Japanese ones, while Qrion does what she does so well…strips the song down into a skeletal number that begs to soundtrack a forest covered in mist. The most interesting contributor, though, is fu_mou, an electronic artist responsible for the netlabel jam “Green Night Parade” – which Robinson included in his BBC Essential Mix a few months back. His version of “Flicker” touches a few ideas present in “Green Night Parade,” and is a nice inter-artist connection. Get it here, and listen to Tomggg’s take one last time below.