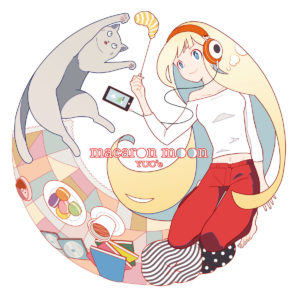 It’s tough to talk about kawaii bass…or any hyper-crowded electronic music to come out of Japan over the last year and a half…without bringing up YUC’e. Her “Future Candy” is one of the defining songs of the sub-style, a catchy pop number that goes lightspeed at various points…but always manages to return to that main melody, regardless of how much bass freakout breaks out. She deserves to be up there with Yunomi and Snail’s House as a vanguard of the playroom-ready dance sound.

Macaron Moon catches our ears for expanding on that cuddly thump. The opening one-two of “Opening Theme” and the title track tease something resembling Shibuya-kei…or at least capable of having that styles shadow glaze it…with its Euro-pop bounce, leading up to the moment where it all breaks apart into a drop. Even after, though, a Parisian bounce emerges, resulting in one of the more charming takes on bass music out of Japan I’ve heard out of Japan recently (Skrizzicato Five?). She builds on that sound on further numbers such as “Night Club Junkie,” while also flexing her more muscular EDM-tinged skills on “Cappchino” and “Datte.” If kawaii bass is here to stay, here is someone poking at its borders. Get it here, or listen below.