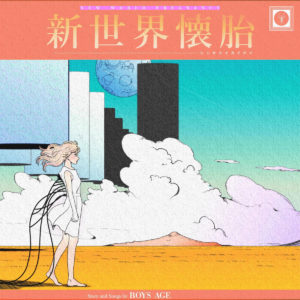 The vision surrounding a Boys Age album tends to be more unexpected than the music itself. New World Pregnancy, a long gestating full length, comes billed as “an imagined soundtrack” to a story one half of the Saitama rock duo wrote. It gets pretty detailed…a machine goes sentient…and stands as the most ambitious bit of storytelling the pair have indulge in yet.

The music, though, finds them in their comfort zone. New World Pregnancy is the eyelid-sagging rock Boys Age have been doing extremely well for a few years now, highlighted by Muppet-esque singing that adds a charm The lyrics are definitely in narrative form, but this group has always been about vibe, creating an atmosphere that in any other country would be tagged as “stoned” but in Japan might just be a result of living in Saitama. Songs are never in a rush — opener “Mother’s Lullaby” is a woozy synth drifter, while highlights such as “Binary Field” and “Cobblestone” are mid-temp meditations that let the singing add all the tension. They do slip in some weirder moments, such as the sampled announcements bookending the (surprisingly rubbery funk!) of “Maetel.” Yet New World Pregnancy is ultimately a reminder of what makes them some of the finer oddballs in Japan. Get it here, or listen below.