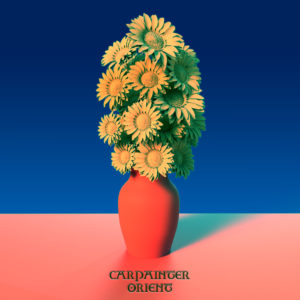 Last year’s Returning saw Carpainter make a big breakthrough with familiar sounds. It’s a strong argument in favor of sticking with a style and seeing what new paths open up over time rather than dashing off into something new and hoping it sticks — Returning saw the producer uncover woozy and emotional new depths to his 2-step, all while maintaining the same springiness that makes it work just as well in a club as out of headphones.

So how to follow it up? Well, by continuing to plug away at that bounciness and see where it takes him next. Orient tip-toes towards something separate from Returning, the two tracks included here moving at just a slightly slower pace and leaving more room for squiggly feelings. The title track whirls around, letting new elements sneak in over the course of the song, but dominated by a synth flutter that gives the song an aching feeling that has crept into Carpainter songs before, but feels more realized over these four-and-a-half minutes. “Mottled Pattern” prioritizes the physical over the fizzy emotions, but still approaches it with more sparseness, and incorporating a Chicago house indebted melody to it. Either way, it is continued poking at something Carpainter knows well, with more great results. Get it here, or listen below.