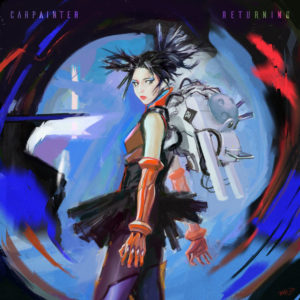 There’s something thrilling about an artist just being entranced by specific sounds, and then seeing what they construct with them. For the past three-so years, I’ve mostly been drawn to the experimental side of this fancy — Foodman, Wasabi Tapes, Taquwami, etc. Yet this feeling manifests itself frequently in the more traditional dance community too, though maybe not always quite as joyfully as on Carpainter’s Returning. The electronic artist has long offered up sleeker garage and 2-step on Trekkie Trax, a netlabel dabbling in all sorts of styles. Individual sounds have always stuck out on his albums and loosies, but everything about Returning feels like a step up. It’s an album that washes over you, but also gets you moving around (at least in a desk chair).

There’s no major shifts in sound for Carpainter here, just refinement of what he’s been doing. Everything just flows so well together — tracks don’t quite bleed into one another, but the transition between each one feels natural. And then there is everything happening within them. See the robotic voices on the start-stop affair of “Airwave” or the crystal wooze of the spring “Sprocket Gear.” “Changeling Life” summons up spirits of old rave music to get the energy pumping, while late cut “Silver Grass” shimmers, keeping an energetic pace but feeling like a welcome comedown. Which is ideal as it leads to the title track, the peak of the whole album. Get it here, or listen below.