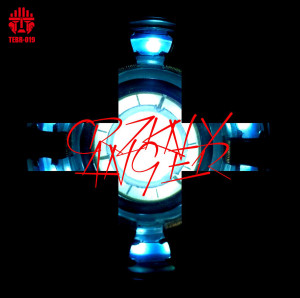 Hiroshima’s CRZKNY has long embraced anger in his music. The first recordings of his I ever heard were his post-Fukushima EPs, blistering collections of juke overflowing with madness aimed at Japan’s government and nuclear energy agencies. That feeling has persisted in his work, whether still taking aim at the nuke industry or just making really aggressive dance music. CRZKNY’s decision to name his latest full-length collection Anger is appropriately fitting, though it helps that the 15 tracks that follow are among his most hard-hitting yet. The target of his titular emotion isn’t made clear like it has been in the past — samples buried deep in some of these songs hint at continued nuclear angst, with warped voices talking about TEPCO and radiation throughout. Once again, nuclear worries power CRZKNY’s anger, and the music that tumbles out captures the emotion both at its most targeted and in a more unfiltered way. Anger plays out aggressively, even playful cuts such as “Hard Bubble Funk” and “Over The Sea” boasting a sharp, metallic edge, CRZKNY adding unease even to the most straightforward numbers here. Get it here, or listen below.