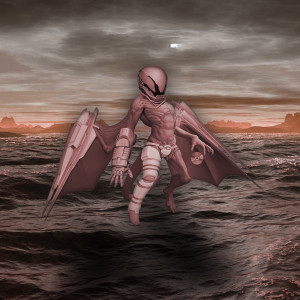 I’ve been sitting on this one for, like, five days, because I Keep waffling on what to even say about it. This collection comes form a set of names revolving around Wasabi Tapes who have been making gleefully chaotic sounds for about a year now, and Gargoyle takes it up another notch. It’s a rush of…everything. Second song “Fatality” features samples grinding up against one another, from video game sounds to air horns to PC Music samples, all over a gentle piano line. “XBox One” goes a step further [OJ Da Juiceman!], throwing capitalistic mantras into the whirlwind. It seems a bit vague, but everything about Gargoyle seems very internet — sounds hailing from disparate worlds, the sort that would never meld in a pre-Web world, crash against one another, made all the more dramatic with a trick Wasabi Tapes artists have been doing well for some time — video-game worthy sounds (and I’m talking cutting-edge games, not like 8-bit bloopery) accentuate the rush. The last song is called “The Internet,” c’mon!

But Gargoyle feels like a step forward because of the moments of peace dotted over the course of the album. Among all of this nuttiness sits “Middle Dutch,” one of the sweetest little songs you’ll hear all year, the whole thing sounding like it is covered in powdery snow. After a run of especially head-snapping music comes “Heaven’s Gate,” a barely there meditation that is almost unsettling in how calm it is after what came before it (though, maybe that’s fitting). It’s one of the longest releases to come out from the Wasabi Tapes clan yet, but they pace it just right to really highlight the clattering sound they’ve been building since starting off. Get it here, or listen below.