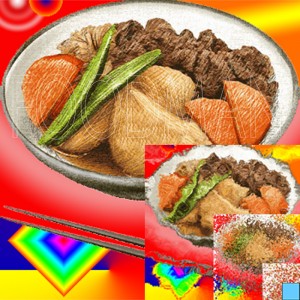 There are a lot of disorienting moments on juke maker Foodman’s new collection, the Oiss EP. The one that has stuck with me the most so far, though, comes on “Yoru Piku Piku,” a skittery song that’s among the absolute creepiest things the Yokohama producer has ever put forth into the world. The beat moves at a footwork-friendly speed, but a robotic voice in the back keep blaring off, to the point where I swear this disembodied entity is repeating the Japanese word for “die” over and over again. And then all sorts of electronic sounds – sudden zips, stray keyboard hits – and it gets totally dizzying.

That’s just one highlight scattered across this latest batch of experimental tracks from Foodman. Though he does take time to be surprisingly straightforward (see “Minimal,” which does away with any wacky sounds or tricks in favor of a more traditional juke construction), Foodman’s also trying new sounds all the time. “Uso Acid” is, appropriately, an acid-house-tinged workout backed by some vocal durrs, while “House” sounds playful, featuring jumbly touches and faux-horn squanks. For every strange sound that comes up, though, there remains a solid (well, solidly skittery) base. Get it here, or listen below.