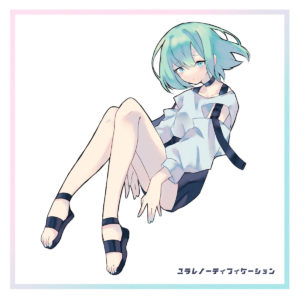 The newest EP from producer Gaburyu shows just how easily human and synthesized voices slide into their busy electro-pop world. Yurare Notification starts off with a song that first appeared back in 2017, the appropriately fizzy “Pop It Soda,” a busy number finding Vocaloid singing traversing around a backdrop drawing from all sorts of dance corners. The newer inclusions only build on this approach. “Botanical Botanical” uses a steady thump as background for digitized rapping, while better still is the Wave-Racer-by-way-of-Animate pinball of “Internet Beach.” Mixed in among all the computerized noise are two songs featuring Somunia, both reworks of preious releases and both frantic creations featuring some clever disruption (“Summer Leap” in particular goes wild in turning the voice into a tool that can be bent and eventually morphed into a bridge all its own as Gaburyu hop-scotches between Jersey Club and 2-Step). Get it here, or listen below.