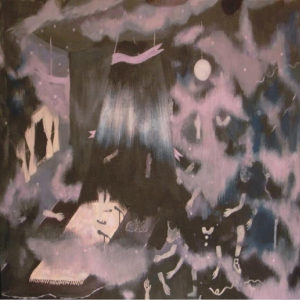 “Collapse” seems to be a word popping up with a bit of frequency in the Japanese electronic music scene this year. Seiho’s recently released Collapse is the most obvious, an album that gets its name from a deliberate move to break down his style and rebuild. Nagoya’s House Of Tapes latest album is called End Of Collapse and, though sharing a word with Seiho’s album makes it an easier connection, it is a similar reconstruction of sound. House Of Tapes’ earliest material was pure crush, four-on-the-floor beats and layers of concrete synths making for a constricting (but attention grabbing) listen. End Of Collapse is the end result of about a year spent expanding, of still taking advantage of space but adding in more melodies and sounds that added some air to the proceedings, highlighted by songs such as “Rusty Pop Noise” and “Youthful Twilight” (both here). This set features even more directions — and, on the barbed “Our Noise,” a return to crushing sounds, albeit balanced a bit by zippy neon noises ripped from a forgotten Genesis game — House Of Tapes letting ideas zoom all over the place, from the ominous ambient of “Night Cloud” to his finest dance track yet, “Juxtaposed.” It’s an album where things seem like they will — ahem — collapse at any moment, disparate pieces smashing into one another, but the chaos always holds, and ends up being absorbing in a way House Of Tapes hasn’t been yet. Get it here, or listen below.