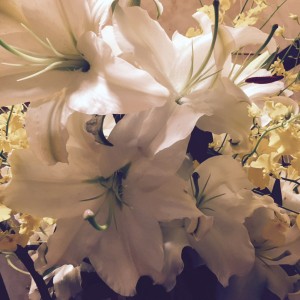 Voices have never really been central to the music Nagoya’s House Of Tapes has made. The focus has always been on the heavy, crushing electronics, a wall of sound acting like the trash-compacting walls from Star Wars. Words, however, have drifted into his work at times — but never like they do on the Magnolia EP. They appear on all four songs here and, unlike in previous lyric-featuring efforts, the words here are central to the tracks. Like, he included lyrics sheets with the free download.

It adds a layer of chaos to his music, which is as claustrophobic (in the best way possible) as it has ever been. Yet he carves out jusssssst enough space for his singing, which adds a disorienting extra layer to the proceedings. I’m not sure if it always helps though — a song such as “Maglia” would have been dizzying enough with its woozy electronics and lockstep beat, if anything the vocals soften the song and take a bit away from it. Yet, at their best, they do make for some wonderful wildness. See the piano-guided “Last Melody?,” wherein a layer of static added to his singing makes for an even more disorienting experience. Get it here.