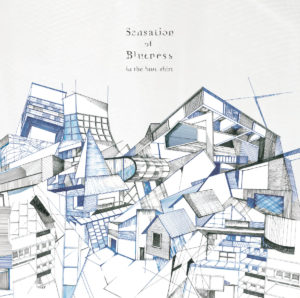 One of our most anticipated albums of the fall is now out, and it delivers. In The Blue Shirt’s Sensation Of Blueness is a display of sliced-up vocal gymnastics, bite-size bits of singing tumbling over itself at a quick pace, but backed up by soft woodwind sounds and relatively pillowy beats on cuts such as “Mellow Out.” The voices often sound familiar — In The Blue Shirt has borrowed from super-famous songs before, so that isn’t surprising — but rather than play up familiarity, he rearranges it into something strikingly new, both in its fastest moments and more relaxed instances (see closer “Beagle”). Somewhere between the pitched experiments of early Taquwami and future funk, Sensation Of Blueness underlines that what In The Blue Shirt is wholly his. Get it here, or listen below.