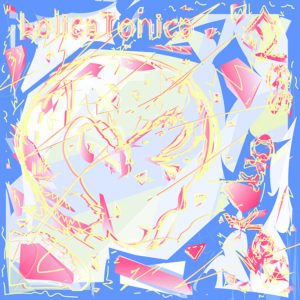 Being able to get one step ahead of the music that influenced is tricky. Everyone has to start from somewhere, and looking towards the sounds the people who inspired you is a pretty common first step. The challenge, then, is finding a way to jump forward and find your own thing. Electronic duo Lolica Tonica pretty clearly came up on late 2000s sounds, with an affinity for Japanese netlabels. And a lot of their songs released since 2015 follow the same hyper-energy template of acts such as Pa’s Lam System. Now, they are ahead of the curve than most young artists — few can come up with something as euphoric as “Make Me Feel,” and that one is their big, this-is-us declaration — but still, the shadow lurks in the back.

Eyes On You, released via Maltine Records, signals the next big jump forward for the pair. It comes via the title track — the other two songs here are charming, but lack the immediate rush of the first number here (“Luv Sick,” while dizzying, also applies its Pa’s appreciation a little thick). “Eyes On You,” like “Make Me Feel” before it, is lithe and certainly delivers release, but whereas other netlabel acts go for total abandon, Lolica Tonica offers something a bit more understated and fizzy. Its roots can certainly be traced — definitely traces of “Like A Lady” here — but they find new angles to it, from the Vocaloid-aping vocal stutter and the high-def “uhs” that spring up. What sticks with me — both on this song and “Make Me Feel” — is how they hold something back, and develop a fluttery tension. Listen below, or get it here.