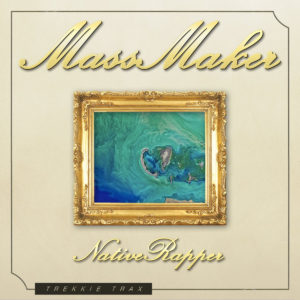 Knew this was coming and already got excited about “Track Maker,” but now via Trekkie Trax comes the Mass Maker EP, which I believe is Kyoto artist Native Rapper’s first proper collection of songs. I want to try to write about this later, but if you liked “Track Maker” or still vibe out as hard as I do to “Water Bunker” (acting as the opening song here), you will probably be a fan of this. And if you haven’t listened to Native Rapper before…while, get on it, dude is a gem.

The one thing that, on a couple initial listens at least, gets my attention immediately is how Native Rapper seems such a product of Japan’s netlabel scene. Beyond songs that celebrate the role of the “Track Maker” and capture the ecstasy of getting together to party (“Party Goes Forever”), the actual music often feels like a nod to artists who came up through those digital spaces — those electro-damped vocals always made Tofubeats an easy comparison, but this album features flashes of Avec Avec (“Cut An Apple”) and Seiho / Parkgolf / etc. (“Party Goes Forever”). Yet Native Rapper interprets those sounds in in own way, using them as a base to create something all his own. Get it here.

← Taquwami Teams Up With OBKR And Tamaki Roy For “Yume No Ato”
West Side Warmth: Onsen Compilation 2 →