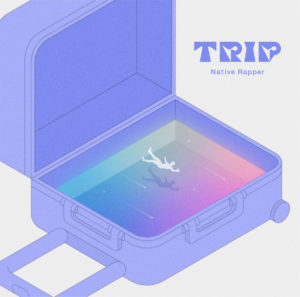 We’re firmly in a post-netlabel world. Everything is “internet music” now, and the idea of online as a potential alternative to existing lanes of music has vanished as major players crowd up what seemed like new alternatives. Sure, corners remain for artists to develop their own world, but they are getting blotted out by the usual major label players crowding up streaming services and website headlines. Netlabels — particularly in Japan — offered a parallel universe of pop and dance music that didn’t thumb its nose at J-pop, but rather re-fashioned ideas and sounds from that zone into something far more exciting and fun than what was actually coming out in the mainstream. But the terrain is a little flatter now, and now these ideas are just part of a larger landscape rather than a place to get away to.

But the spirit of that community carries on in a lot of young artists coming up, including Kyoto’s Native Rapper. It has been clear for a while now — early EP Mass Maker was basically an celebration of all things netlabel, down to a song called “Trackmaker” — but first full-length Trip synthesizes both the attitude and approach into one fantastic collection. It partially serves as an introduction to the artist to a wider audience, so familiar numbers such as “Water Bunker,” “Keep It Real” and “Imasara” featuring Lulu pop up once again, highlighting Native Rapper’s Auto-tune-glazed rap-sing in all its bouncy joy. But it’s the new songs that really round it out and give this one an air of dance-pop celebration. The title track weaves in house elements that Native Rapper soon ping-pongs across, warping his own voice in the process. The charmingly titled “Swag Girl” uses electric guitar riffs to add power to an otherwise skittery synth-pop bop accented by digi-horn blurts. “My Billards Bed” matches a laid-back strut (that springs to life in the back half) with pool ball samples, while Native Rapper calls on Yunovation for a melodica melody to craft a beat around on “Grand Melodica.” Trip offers up an album’s worth of genre-blurring dance-pop, and it’s that energy about avoiding borders and just going for it that makes it one of 2019’s early highlights. Maybe corners just for the Native Rapper’s out their are getting rarer, but we can still enter their worlds. Get it here, or listen below.