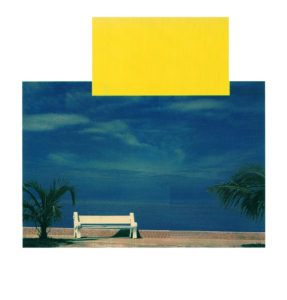 Up until now, Pasocom Music Club have been an outfit creating sleek, catchy dance-pop songs echoing a particularly plastic past, but almost never giving into nostalgia (even covers, such of Sugar Babe’s beloved “Downtown,” turn into something so radically different as to be more than the equivalent of staring at your record collection). This year’s magnificent Park City highlights this side of them perfectly, taking familiar stainless-steel glitz, updating it for today and finding the same heart-racing emotion (and humor!) within.

She Is A casts Pasocom Music Club in a new shade. It’s a reimagining (well, they call it a set of “covers,” though that doesn’t do it justice) of city pop honcho Toshiki Kadomatsu’s Sea Is A Lady album. Here, Pasocom draw from something specific rather than an idea, and familiar elements pop up frequently — songs here boast similar melodies to Kadomatsu’s original, but are often redone with new sounds (“Sea Line”) or imagine the tunes without singing (“Lovin’ You”). It’s listening to something vaguely familiar and finding Pasocom Music Club Inside, while also seeing a project discover interesting new perspectives on familiar songs, such as “Sea Song” turning into a bubbling cauldron of tension or a song like “Sunset Of Micro Beach” teasing vaporwave (it is, indeed, slower) but coming from an earnest and nostalgic place. Another strong entry from this project, and another argument for interesting looks into the past rather than easy ones. Get it here or listen below.