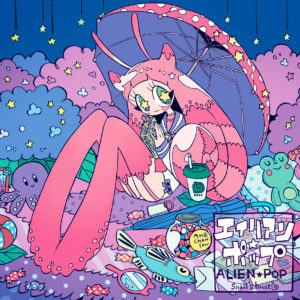 This year has found Snail’s House pushing his sound in all sorts of directions, for better or for worse. The ever-prolific creator joined other electronic producers in Japan (or those abroad playing with Japanese imagery) in shying away from what has been described as a “kawaii” sound, best summed up as a busy overload of synthesizers, bells and piano melodies. This September’s WonderWorld veered darker, but faltered due to an overabundance of cheesy movie-ready chanting and cliche continental sounds that made it sound like the inside of a Kamakura gift shop. The following Flowers, meanwhile, shifted back to a more colorful sound, but felt restricted by a desire to be more refined. Snail’s House got too cute, but not in the way you’d expect.

Alien Pop is a welcome readjustment. “This album is about alien girl who have crush on human. she tries to speak human language but doesn’t work. so songs in this EP are basically sang by her trying to sing in human language and there are no lyrics,” he tweeted, and the inclusion of nonsense vocals —- sounding like Vocaloid — adds a vital catchiness to the music. Have all the Technicolor wooshes you want, you still need something to tether it together, ideally something catchy. “Cosmic Love” pops and fizzes, busy but made sweet by the singing, even if meaning technically isn’t present. Same goes for the chirpy “Charm Point” and a new version of “Koisuru SpaceGirl,” the best song Snail’s House has penned to date and seemingly the inspiration for this release as a whole. In many ways, Alien Pop hints that Snail’s House excels at a certain sound worth exploring, but there are also intriguing moments such as “Invitation (Intro),” which show the producer entering new terrain without feeling forced. Get it here, or listen below.