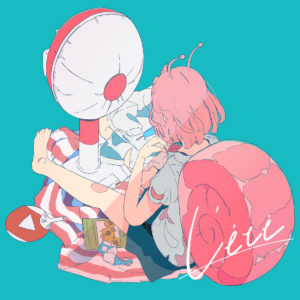 Music has been pushed to the background more than ever in 2018. It isn’t a new development exactly, but generally speaking songs often get treated like wallpaper. See mood-centered playlists on streaming services, or how contemporary soundtracks to YouTube influencer videos sound, or the seamlessness between commercials and original works. Changing times, but as it continually feels like music is nudged further into the back, the more I’ve come to appreciate the growth Snail’s House (or Ujico, another project by the same person) has shown over the last couple of years. Initial releases from the project were firmly in the “kawaii” camp, and could feel a few bass whirrs removed from slotting nicely into a looped livestream that you could potentially do homework to. Yet something evident in their work is a desire to build up and explore new territory with their sound, rather than settle for something that has proven quite lucrative on Bandcamp (and lord, just poke your head into various niche-genre communities online…a lot of people are coasting!).

L’été features nearly no words but overflows with so much attention to detail that simply playing it as background music seems like it would be tough. Snail’s House has built on the piano-based foundation of previous releases and swirled in new touches — “[vivid green]” plays around with the idea of samples interrupting the melody, but rather than crash like in future bass they add charming detail via railroad crossing chimes and breath-long pauses. No sample goes to waste in “Himitsukichi,” every one playing a role in the song itself, while “[sunflower]” uses small shifts in sound and violin surges to create an endearing song in an intimate package. Snail’s House even weaves in something like “Platonique,” a rumbling number closer to toe than other anime-favoring producers in his realm. L’été shows how much is possible in a sonic palette often used as a backdrop, and is another step forward for Snail’s House. Get it here, or listen below.