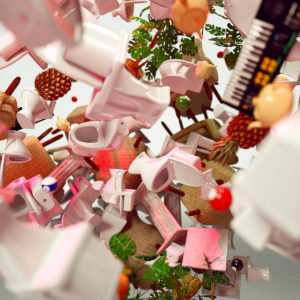 The artists behind the mind-bending Wasabi Tapes label have released plenty of loosies over the course of 2017 — but two of their cornerstone projects dropped albums on basically the same weekend, giving anyone entranced by their sound-warping style plenty to listen to over the last few days. Let’s start with Nyoi Plunger, the latest album from Toiret Status and one that was actually teased over the last few months. Building on last year’s dizzying Omaru, Toiret Status upped the part of their music that feels like one of those cartoon whirlwinds that envelop a fuzzy character after a piano drops on them. Second cut “#44” feels particularly animated, with spring sounds and assorted woodland-critter sounds among other noises, while “#42” plays out like a VHS tape being rewinded in ten different directions. The music trickles, bursts, pokes, Pac-Man-dies, Chipmunk squeals, bounces, PK freezes and more over the course of this album. This is ASMR taken to a ridiculous new place. Get it here, or listen below.

While Toiret Status pushes a style they’ve done before to wacky new places, $ega & The Rainbow Streets’ offering finds the artist who also records as DJWWWW branching out towards something different. Despite opening with a classic rock station ID bumper — hinting that we are heading towards the chaotic sounds associated with DJWWWW — the first song reveals itself to be a twinkling bit of strange funk, featuring a vocal sample from Junko Yagami’s “Communication,” but done up in a way that’s totally alien to other internet-centric appropriations of ’80s Japanese pop (not to mention echoes of “Say Goodbye” deeper in). This is a set using the past as building blocks, but in a way that isn’t completely eye-rolling by this point in 2017. The rest of the album finds them taking the busy, collage-like affect of previous works and taking it somewhere softer and often in more elastic shapes (there are actual grooves to this!). It still gets pretty claustrophobic, but it’s a new look at the Wasabi Tapes brain melt. Get it here, or listen below.