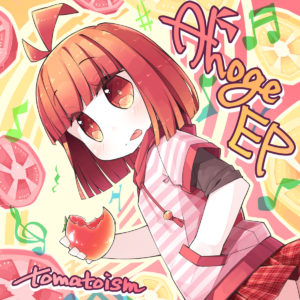 Call it a happy coincidence between my music writing and online-culture writing, but this week I’m (kinda) diving into the world of “moe” for the latter. And, at the same time, a new anime-sample-heavy EP from Tomatosim drops via Omoide Label. I’m not particularly into anime — I know most of the bigger names mostly by simply living in Japan, though I’ll still blank on names, like uhhh that one that’s just Osmosis Jones but Japanese — but working on the web piece has reminded me how uneasy anime samples (or visuals) can make many listeners. I think Tomatoism avoids that here by just covering them all in energy. This is the producer’s most energetic set yet, opening with the shuffling and skittering sample-rush of “Naruhodo” before picking the pace up more on the vocal-slicing highlight “Salt Powder.” Save for a slightly slower detour into rap on “Circulation” (who is the rapper here? They are great! Give credit!), this is one that always adds and rarely slows down, which hides anything that could put some folks off. Get it here, or listen below.

Correction — The rapper featured in “Circulation” — is not a rapper per se, but rather Kana Hanazawa…and this is a sample of “Renai Circulation” which was the opening theme to the anime Bakemonogatari, which I did not now existed. Make Believe Melodies regrets the error, though hey, told you I don’t know anything about anime, at least I delivered!