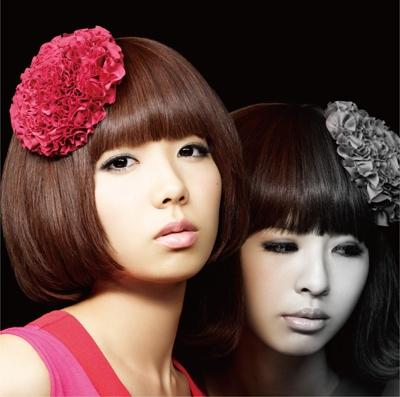 Oh Vanilla Beans, how you perplex me. As this idol duo do every time they put out a new single or album, I am left staring at my computer screen like I’m trying to decipher CIA code, trying to figure out whether they are J-Pop prankster geniuses or just so far down the rabbit hole they seem like a joke. Just like previous efforts, the music itself isn’t the riddle – “Choco Mint Flavor Time” sounds like upbeat, fun pop music, another sonic reminder that Vanilla Beans respect the legions of idols that came before them. It has some nifty piano, guitar and bells too. No “Nicola,” but nothing objectionable either.

No, I fuzz out about the group’s image. My theory is that Vanilla Beans realize how ridiculous the concept of a pop idol is, and they are subverting it while pretending to be just that. That’s why they appear stone faced in so many of their videos and just generally pack all sorts of strange imagery into their visual side. Like, did you know the duo’s backstory is that they hail from the Nordic, a point driven home by shots of various Nordic flags and some text serving as very brief character building? Singing into ice cream cones? Ehhhhh a little more reasonable. Stacking blocks just to knock them down? Or how about the shot of them eating ice cream with their hands? I might be going a little too Dale Gribble here, but I swear Vanilla Beans know what’s up. Watch below.