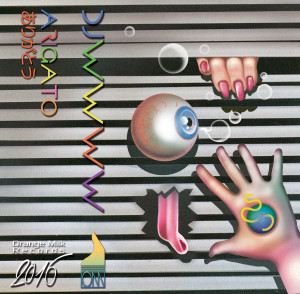 Orange Milk Records…who have been highlighting great Japanese artists such as Foodman and mus.hiba for some time now…put out four albums late last week, two of which came from a pair of this country’s wonkier producers going. Anyone reading this blog for a while can probably guess what sound DJWWWW’s Arigato leans toward — a disjointed collection of high-definition samples, some sounding like they come from next-gen console games and others lifted from Migos’ songs, all arranged in a way where everything clicks just right. A song like “Sampling” hits all of that, but a longer player like Arigato allows DJWWWW to show off his reserved side as well. Opener “Reality” features some harsh rushes and is constructed out of the same modern-day chaos as, but operates at a more reflective pace. Arigato stands as one of DJWWWW’s finest moments, because he shows just how versatile his modern-day tapestry is. Get it here, or listen below.

Nobuyuki Sakuma — best known as being the driving force of Jesse Ruins — and his CVN project operates in a similar area, albeit one a little less neck-snapping. His Orange Milk release Matters explores similar sonic mish-mash, from opener “First Distinction’s” mix of piano, skittery beats, bubble sounds and noir-sounding samples. It’s never a headfuck like DJWWWW, but…similar to much of Jesse Ruins’ work…unsettling. Get it here, or listen below.