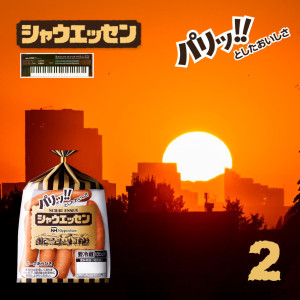 The City Pop revival chugs on in the Japanese music industry, and as has been pointed out by Ryotaro Aoki at The Japan Times, it’s basically just a joke. So bless outposts like B.O.O.S.T.R and compilations such as the just-released Schau Essen 2, for actually diving into the at-times grotesque sounds of Bubble Era Japan rather than just use them as a hip slogan. What makes this set endearing actually stems from an element not typically associated with City Pop, or ’80s funk, or anything one really associates with that era — the imperfections add a nice human-edge to all the neon. Coffee And TV’s opener “Drive With Me” is a shimmering bit of disco-pop, featuring the producer singing over it (“vocal is shit. It’s me” he writes), which adds a sincerity that makes it stand out. Or how one just-over four minute track here is actually a radio show skit (starring one person doing voices). Or how a shimmering number from Boogie Idol gets accentuated by what sound like alligator chomping sounds and some woozy noises in the back.

Yet for all these moments, Schau Essen 2 shines because of great, catchy songs. C-Side Sea Site delivers a highlight early on with the sun-soaked “Summer Reflection,” while the beat picks up a bit for the squiggly “Bubble Over” courtesy of Asuka Tanaka. Coupled with a handful of great instrumentals, it makes for a good collection with plenty of charm. Get it here or listen below.