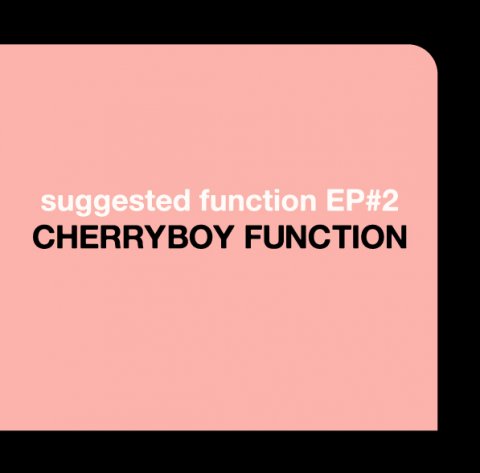 Cite that old Elvis Costello about dancing and architecture if you must, but writing about DJ-made music shouldn’t require any goofy similes in order to convey what a fruitless endeavor it can be. It’s not like more critically-friendly stuff like The Field or Daft Punk, which allows writers to focus on minimalism and Barry Manilow samples respectively instead of having to figure out whether this stuff packs a club (for the record – sometimes and fuck yes). This year’s dubstep darling James Blake released an album being slathered in critical praise that’s also nearly impossible to dance to. When a club-centric DJ puts out an album, though, they tend to emphasize creating great music to dance to over hype-baiting innovation…filling a club gets them paid after all…so writing about this becomes slightly trickier.

Cherryboy Function certainly falls into the “fun times” category. Most articles about the artist spend at least a sentence covering his “acclaimed” DJ stints and tours. He hasn’t released an album in 3-and-a-half-years, and I have a feeling it wasn’t because he hunkered down in the lab trying to change the game. Instead, all available materials indicates he just wanted to focus on his live show. His recently released Suggested Function EP #2 reflects this devotion to his live craft, as all 30 minutes of this EP cater to the weekend set. Yet Cherryboy Function’s also a deceptive architecture and his music hides intricacies that allows a goof like me to write something more than “it has great beats!” So…best of both worlds.

All of Cherryboy’s strengths show on opening number “Pulse Of Change,” a whirling light-show and one of the best Japanese songs released so far this year. He adopts the same super-bright formula fellow Japanese electronic artist De De Mouse uses on his hyper-chipper drum ‘n’ bass bits, yet gives his flashes time to grow and never rushes them. “Pulse” introduces various cartoony twinkles over it’s seven-minute run, each element taking it’s time to blossom until everything sort of hits at once and you wonder how that happened. It’s the sound of stumbling around late-night Shinjuku or Osaka, giddy on booze, and taking in all the gaudy neon shaped signage like it’s the Pyramids. It’s a delirious song, but one that’s been intelligently planned for quite sometime now.

The rest of EP isn’t quite as woozy as “Pulse,” but plenty of moments come close. “Distopia” boast similar pulsing electronics but works in more wobbly bass. It’s a slightly more reeled-in “Pulse Of Change” with the bubbling joy replaced by something a bit more stylish. “Plan E” dabbles in the same congo percussion Baroque and 80kidz toyed around with last year, yet whereas those songs felt like crazy parties spliced up, Cherryboy’s take comes off as wanting to soundtrack said shindigs. It’s also runs a little deeper, as he introduces a strobe-light interlude that then superimposes itself over the rest of the track. Only “Tornado” seems like a slight let-down, being the most generically “club” track on an EP showing considerably more depth than you’d expect. Even then, it’s a perfectly good dance track with, er, great beats.

EP stands as a strong electronic album containing complex structure as well. It’s also the perfect format for Cherryboy…his last full-length Something Electronic featured plenty of similar moments of brilliance but that LP’s hour-plus play time came off as incredibly daunting. Thirty-minute blasts of his tunes are much more agreeable, his songs able to shine without ending up muddled in everything surrounding them. And yeah, for all this geeky analysis it’s an album bound to sound good on earbuds and in a nightclub.