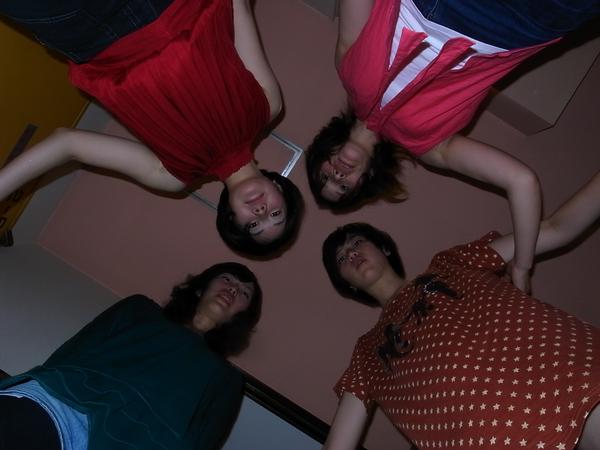 Usually rookie bands stumble with trying to create a signature sound on a first album go-around, often imitating other acts instead of carving out something distinct. See: the majority of British indie since 2005. Tokyo’s Merpeoples, though, sound like the rarest of young bands on their self-titled debut mini-album – a group that has achieved a signature sound. The four-piece create art-school-tinged rock songs that spin around themselves, at-times cheesy keyboards sprinkled over the in-line guitars to add the proverbial sparkle to this science fair exhibit. It’s tempting to play the “band X sounds like band Y” game and compare Merpeoples to Foals, but this Japanese quartet refuses to fire off in sudden directions like that math-rock group tends to do. Everything stays locked in place…lead-off track “Picasso” barely breaks stride, flattening all in it’s way and basically forcing you to love it.

While Merpeoples got the signature sound down, they still need some work in actually utilizing it. The problem with having such a machine-efficient sound is that, unless said machine transforms or something, it can get tedious after a while. Merpeoples has way too many of these moments for an album clocking in at under half-an-hour. The biggest culprits are the huge five-minute-plus tracks jutting out of the middle…”みだらなストーリー” plods along, the novelty of its Middle Eastern keyboards wearing off as the song fails to move anywhere (the music almost erupts late, but they reel it back in before anything develops). “Ma Moon” fares a little better, but still squanders an interesting Dracula-on-the-keys vibe for a “meh” horror by the numbers. Even a great track like indie-breakout-waiting-to-happen “Sherman” goes about a minute to long. Yet the potential remains…along with “Picasso,” late cuts “callcallcall” and “スローモーション” jumps out as absolute highlights. Here Merpeoples explore a little more, but not too far from basecamp. They might standout because of the brisker pace, a massive improvement over the trudging nature hike of this albums middle. So, despite being far ahead on the “trajectory of an indie band” timeline, Merpeoples still ends up being just a promising debut, a completely enjoyable listen on its own but one demanding that whatever comes next bests it. It’s almost like the band are too excited about their style…a few edits here and there and this becomes an entirely different record. For now though, band to watch.