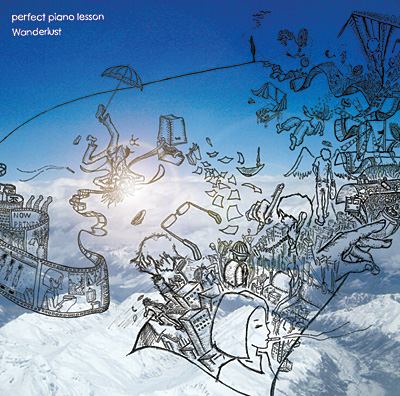 Perfect Piano Lesson open up their second full-length album, Wanderlust, by blasting out of the gate. After a little bit of Primus stretching, “(leaving this planet on the) Sunday Night” launches into a Chili Peppers’ (!) guitar groove that’s somehow psychy and math rockish. The band’s voices pop up soon after, leaping off one another and bouncing into separate directions only to meld together for the chorus. It’s an absolute attention grabber of a song, the type of opening track that hints at a band reaching for some next-level sounds.

Just a tease, it turns out. Wanderlust never comes close to replicating the manic heights of “(leaving the planet on the) Sunday Night” in the 41 minutes that follow it, opting instead for a less daring approach to math rock. Not a knock against the bad, as Wanderlust is a solid enough rock record full of great songs. After a hell of an opening number, though, it’s a bit of a let down to not see this group shoot out even further away from traditional structure.

Perfect Piano Lesson play intricately timed math rock, the type of stuff critics drop the word “angular” on. Every sound seems carefully constructed: the drums push things forward, the vocals come slide in at the right times, and the guitars stop and start like a Rube Goldberg machine. Songs like “1,000 Miles Above” and “Parallels” work this formula well, while “Night Is Calling” starts off more messy before everything drops off and a single guitar line rolls into the song. Wanderlust features nearly no duds (“Avatar” being the lone, boring exception), but also lacks many huge, standout moments by a band perfectly capable of pulling them out.

The culprit – the vocals. Yuichi Shirane’s got a great, versatile voice. On the slow-moving “Submarine,” all sides of his pipes get time to shine: he sounds like Mike Kinsella on the verses, like a slightly more nasally Billy Corgan on the choruses, and like Thom Yorke when he reaches for falsetto. It’s a powerful tool that too often seems under exploited on Wanderlust. What pushes “(leaving the planet on the) Sunday Night” to exciting levels is how the multiple vocals clash with one another before reassembling for a great pay-off of a chorus. That vocal experimentation doesn’t pop up often enough on this album, robbing good ideas of the extra something that could have made this LP excellent.

There are a few amazing moments outside of the first song. The short shot of “Superstar” once again bring in RHCP-style guitar work and pulls it off excellently, the song also boasting one of the best choruses on Wanderlust. The lonely swagger of “Sugarcubes on the rainy avenue” stand out as the album’s best slow song, while “Last Song” sees Shirane stretching his voice in all sorts of great directions while the music around him rises up, falls back down and repeats itself. Last is “heart & heart,” Perfect Piano Lesson’s excellent, fuzzed out collaboration with Texas Pandaa. The reason for this song’s greatness? The wave of warped vocals lingering in the background.

The easy route to take on Wanderlust would be to pat Perfect Piano Lesson on the back and say “great job, you made a nice math rock album better than half the J-Rock floating around today.” Because they did. Thing is, Wanderlust brims with so much potential to be a year-end list crasher and J-Rock jump forward it seems wrong to not lament what could have been. Perfect Piano Lesson have a classic album in them, they’ve just got to be more willing to be daring, as they do several times on this album. So, Wanderlust is an exceptionally good (especially given that this is the bands sophomore full-length) worthy of attention. Lets just hope Perfect Piano Lesson aren’t content with that.