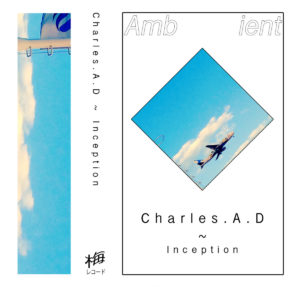 A fun exercise is to think about how many obscure Japanese albums from the late 1970s and 1980s are enjoying renewed interest today, and imagine…what will the equivalent be 20 or 30 years down the line? This isn’t just limited to Japanese music (honestly, I feel future decades are going to find a lot of gems from the last decade, especially as conversations around music shifted towards an elite upper level driven by attention. A lot of stuff that hasn’t gotten love will be picked up by the listeners of tomorrow and be embraced!), but since this is a blog about Japanese music, that takes up most of my mental space.

Inception seems like something that is bound to be a niche release in 2019 but really captures a specific moment in musical creation while also offering new twists on the style. Funabashi-based artist Charles.A.D hits on a sound falling somewhere between new age, ambient and dance (especially anything tagged as “lo-fi”) to create an album worthy of movement and meditation. It is at its best when just blissin’ out on the long running number nearing 10 minutes, “Sun-Rising” and “Peace Of Ego” (the latter being the album’s high point, a faded house rumbler mutating into something reflective as it bumps ahead). But moments of ambience like “Samsara” or the light rattling of “Pros And Cons To Everything” offer some nice nooks to retreat into as it plays out. Most striking, though, is that Charles.A.D has taken cues from a bunch of trendy (or recently trendy) sounds and struck on something both capturing them all but not sounding much like them. Get it here, or listen below.