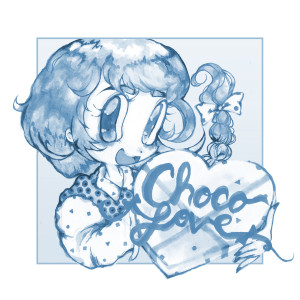 Last October, Tokyo producer Chocoholic released “Choco Love” via English label Hex Mania, a number that starts with the familiar sound of Mario before turning into an appropriately sweet direction. Existing in the same tightly packed universe as future bass artists such as Wave Racer, the song overloads on squiggly synths and sudden tempo changes, but what makes it stand out is the main vocal, one where the repeated utterance of “I’ll take you anywhere in the world / I’ll show you lots of places” is delivered as richly as it can, making the whole number sound like it’s going to bubble over because of its feelings. Get it here, or listen below.

Now, a handful of artists have gone and remixed “Choco Love.” Lolica Tonica manages to make it even more fast-paced than before, slicing the emotion-drenched voice into even smaller servings and letting them trip over one another, to the point it morphs into a Jersey Club song. Miii slows it down and turns it slightly menacing, while Yasuha. gets extra fluttery with the synths. Rounding it out is a stuttering rework by Teklife’s DJ Chap, which slices the original vocals out entirely. Get it here, or listen below.