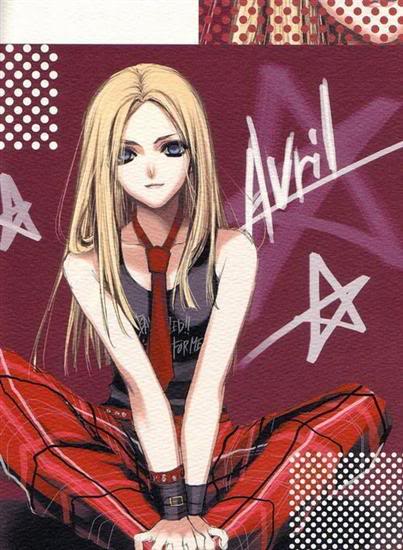 All credit for the above art goes to AvrilLavigneLuver4. I honestly appreciate good anime art of North American pop stars. On to the music.

Avril Lavigne “What The Hell”

Long before Justin Bieber descended from the icy north to capture the hearts of Twitter-happy teenagers and inspire the irrational hate of an older group, Avril Lavigne served as Canada’s huge pop star come south to be loathed for no particularly good reason. Whereas the Biebs gets flailed for the same reasons every boy band in recorded history has been (which, aside, would be because some people don’t get somethings were made for specific age ranges), Lavigne was mostly skewered for one very specific part of her image – her “punk” side. She told her boyfriend to “take off all your trendy clothes” and spelled “skater” with an “8,” and a lot of folks instantly hated her for this because she really wasn’t a skater or a “punk.” Critiques of her music…which, I should truthfully note, came between classes during high school…never really focused on the songs themselves, which ranged from inoffensive-to-the-point-of-being-boring pop to pretty great stuff. Nope, she wore a studded belt and THAT’S NO GOOD.

Lavigne’s popularity in America took a big dip in recent years, yet she remains insanely popular in Japan. Which is where I first heard about her new single, “What The Hell,” which she’ll perform on Music Station this week. Her music warrants commercials here, and her song “Alice” served as a major marketing push for last year’s Alice In Wonderland, something I don’t think happened in America. On a more anecdotal level, every time I karaoke with Japanese friends “Boyfriend” or “Complicated” always makes an appearance, while one acquaintance of mine can only name three American acts…Lady Gaga, Eminem and, well, can I make it anymore obvious? The more cynical would chalk this up to the Japanese loving terrible music, but it probably has more to do with a much more subdued obsession with authenticity. I just don’t think anyone cares whether Lavigne can actually do a kickflip…they only hear her pop, which isn’t all that bad.

That’s exactly what “What The Hell” is…above average pop. Lavigne’s clearly reaching for the past glory of her best song “Boyfriend,” fully embracing the sweet pop sounds she early on tried to stand apart from. She keenly updates the formula for 2011, embracing the Kelly Clarkson/Katy Perry template down to the big, soaring chorus. It’s odd that “What The Hell” sounds very similar to Clarkson’s “I Do Not Hookup” despite featuring the exact opposite theme – “all I want is to mess around/and I don’t really care about/if you love me/if you hate me.” It’s a little more complex than that…she implies she might just be doing this to mess with a bad boyfriend’s head…but still boasts a catchy bounce anchored by some cheesy organ. It doesn’t come close to matching the cheerleader-shouts of “Girlfriend” but it’s a solid pop song and a welcome one from Lavigne. Expect it to be dissected in the West but soundtracking many karaoke runs in Japan.

What the hell has happened to Johnny’s And Associates in 2011??? Last week the guy from Buzzer Beat also known as one of the dudes from NEWS (real name Yamashita Tomohisa) won my completely meaningless “Winner Of The Week” award with a weird, swinging song that sounded very different from the wallpaper Johnny’s usually slaps up. Now we get KAT-TUN, a J-Pop band responsible for some really terrible music, dropping an uncharacteristically interesting single. It’s not a harbinger of the end days…last year’s “Going!” sounded way better and managed to be even more unexpected…but surprisingly twitchy stuff coming from a group usually told to coast through similar-sounding dreck. “ULTIMATE WHEELS” imagines the J-Ballad as something with a pulse, the pomp intact but now joined by something that makes it actually listenable. The string opening sounds revolutionary enough for KAT-TUN well before it turns into a stomp, pushing what could have been sappy vocals into something carrying way more impact than they have any right to. Their are even moments on “ULTIMATE WHEELS” where these guys sound angry. The chorus slips a bit by being a bit more Johnny’s cookie-cutter, but the impressive instrumental and solid singing (!) from the group make this a strong song in KAT-TUN’s catalog.

Straight-up ripping off other artists remains a proud pop tradition, so I’m not going to condemn Meisa Kuroki’s horrifically titled “LOL!” for being a massive biter. What I will condemn “LOL!” for is managing to rip-off an already obnoxious song – Pink’s “So What” – and up the general shit-ness in every way. Her scuzzy keyboards don’t sound like pirate music, instead imitating playground taunting envisioned by Basshunter with digital castanets thrown in for…I don’t know. The chorus, easily the most obvious plagiarism, manages to come off as soulless. The one advantage Kuroki has is the fact I can’t understand most of what she’s saying – maybe she doesn’t want to start a fight. Yet she goes and includes a pre-chorus rap that somehow tops everything that made “So What” sorta noxious. Alas, this single has been out for a while and ended up being a smash hit so expect even more weak imitations soon. Mandatory TXT talk burn – “LOL!” more like “GTFO.”

What the?????? This sounds very similar to “LOL!” which means it also bears a resemblance to “So What” which means it sorta isn’t good! Though it easily trumps “LOL!” by at least embracing minimalism and sticking with it. Not to mention it has a better chorus. Still, nothing terribly inspiring. So instead of waste words on this boring sludge, let’s talk about Girls’ Generation’s collaboration with Intel “Visual Dreams.”

By “talk about” I mean simply post and exclaim THIS SONG IS REALLY GOOD! Maura Johnston of Pop Dust wrote up a great little review of it which I’ll direct ya to.

The second K-Pop act of the night, TVXQ goes places no J-Pop artist would ever dare. Specifically, all over the fucking place. The biggest flaw with “Why? (Keep Your Head Down) ends up being that the intro – all huge drum hits and video game buzzes with some horn stabs thrown in because why not – sounds like the most interesting idea here. It doesn’t last long before a big, ugly guitar enters the picture and stuff gets weird. At it’s core, “Why?” is a rap-pop song, but one boasting Jock Jams guitar and a wide array of random electronic noises whizzing by with no real pattern to any of it. It’s overwhelming – to the point where it becomes too muddled AND something you can’t turn away from. I understand why Japan has become so interested in this type of K-Pop…it’s hard not to pay attention to it.

flumpool “Two Of Us”

For about 35 seconds, flumpool show the world just exactly what U2 would sound like if they tried to do J-Pop. Immediately after, “Two Of Us” turns into a run-of-the-mill flumpool song, unexciting rock played with the intensity of a Discovery Zone ball pit.

Winner Of The Week – Avril Lavigne probably has the best pure song here, but let’s give KAT-TUN some homefield advantage and give them this award.