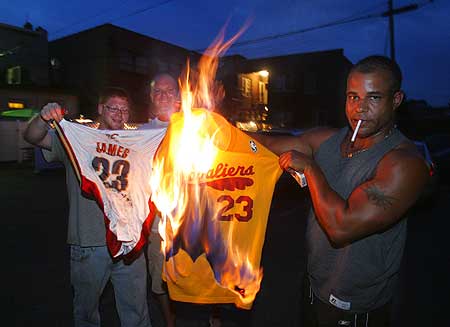 I originally Googled Image Searched the phrase “I Hate This” but that only gave my Pussycat Dolls’ screen grabs and dogs in sweaters. So I switched it up to this. Pretend everyone I write about this week is the jersey and I’m the distraught Cleveland fan driven to lighting things on fire.

While researching Angela Aki, I discovered her mother owns the Aeon Corporation, a large chain of English conversation schools in Japan. The more you know!

Aki’s a pretty good example of the power of image, something that seems obvious in 2011 but can still sometime be forgotten about for whatever reason. This new single isn’t very good. It’s a hum-drum piano ballad a ton of other artists could have recorded, including the likes of AKB48 or, sadly true given their last new song, Perfume. Yet Aki seems to have been molded into a “serious” performer, a true artist amidst a sea of school-uniform-wearing popbots really letting her soul loose. Sure, every week a new ballad that sounds eerily familiar to this appears on the Oricon charts, but look at how she plays the piano!

Obviously, this isn’t remotely some big “gotcha!” moment, Western artists and probably plenty of Japanese artists have been playing the same trick for the past 30 years (“did you know Lady Gaga can play a piano is super serious??? Let’s listen to that song about her hair again”). But if you are going to make a big deal about chasing your muse or whatever, please try to do something interesting musically.

Predictably, this song sold like bottled water at Coachella. Nothing shocking, considering the group has absolutely dominated the Japanese music landscape for the first half of 2011, capping off the AKB-bonanza by releasing a new album this week that’s probably bound to chalk up a sick amount of sales. What is kinda surprising is that this single managed to break the highest first-week single sales record previously held by Mr. Children, set in 1996. Now I’m surprised AKB48 managed to do it, but I am a little shocked they did it with THIS, an obvious retread of “Heavy Rotation” that somehow manages to be even more wallpaper-like. Good for them, I guess.

Warning: this video isn’t very pleasant. The below one, that is. The above song isn’t much better though.

Ya know, maybe I AM being unfair to these tedious hunks of cheese-stanked balladry. They all sound alike, sure, but maybe folks like Sone Yukie are penning some absolutely moving lyrics I just don’t understand because I can only hold a conversation in Japanese with toddlers. This shit could end up the soundtrack to the end of the Israel-Palestine conflict, and boy will I look dumb! So open challenge…please send me a translation of the lyrics to this song so I may see the light. Seriously, Google is letting me down. Send ‘em my way, educate me please!

I mean, after all the diatribes against ballads, I should admit that FUNKY MONKEY BABYS deserve some credit for finding this different approach to J-Pop and have turned it into a nice career. Great for them, and I’m glad I don’t have to listen to another slow-burning schmaltz-athon. Still, this song irks oh so much. It basically follows the same BABYS blueprint they roll out for every song – vague “hip-hopness” Disney-ed up into a painfully upbeat game of pop hopscotch. So, if you loved them before prepare to love them all over again! For the rest of us…not even the kinda endearingly goofy organ solo late in the song can save it from being another exercise in FUNKY MONKEY boredom.

Winner Of The Week – I throw the sentence around a lot, but this might legitimately be the worst week of Music Station yet.