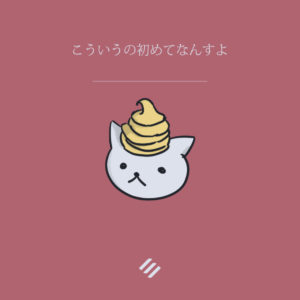 Vocaloid is a weird tool and oftentimes a tough instrument to build songs around. Yet one realm where synthesized speech tends to do well is electro-pop, and Hyogo-based producer Mameyudofu shows just why on the bouncy Kouiu No Hajimete Nansuyo album, released recently. The vocals on each of the four songs are clearly that of Vocaloid, but whereas in some settings (cough rock cough) they would be awkward, on this set of Nakata-ish pop they blend wonderfully into the bright and bubbly synthesizer around them. Opener “Time Capsule” is the immediate pop rush…and, all credit to Mameyudofu’s programming, that digi-voice at the center actually sounds both upbeat and melancholy at the same time…though the real treasure is the next song, “Awa.” That one practically swelters, and has more in common with Kosmo Kat, save for the sweet signing at the center. Get it here, or listen below.