Tokyo’s LLLL is prepping the next installment of the Chains series for a December release, and “For F” shows a continued commitment to the shadowy but ultimately hopeful sound that has defined the bulk of this project. The music here comes off as among the heaviest things LLLL has created as part of this series, made clearer by guest contributions from Calendula and Meishi Smile. The bright vocals heighten the harder-hitting music, offering up the best tension to emerge from this series yet. Listen above. 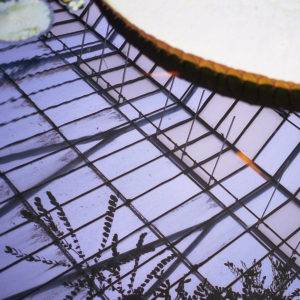 The latest installment in LLLL’s Chains series finds the Tokyo project in a softer, more melancholic mood. Not to be too obvious, but it’s right there in the title — “Phase 3: Reflect”, and the accompanying three songs aim for a head space looking back, without any of the harder thumping sounds that popped up on earlier installments of this run. We’ve already written about “Slowly We Come,” this release’s centerpiece, and it is bookended by the slowly burbling wonderment of opener “Destination” and the fluttery dance-pop of “Mahou.” Most telling, this phase only features the original LLLL set of contributors…no guests, but rather a return of sorts to the sound that made them stand out in the first place. Get it here, or listen below.

LLLL’s Chains project has allowed the Tokyo-based producer to explore a wide range of sounds and tempos, some entries offering speedy dance numbers, while others have leaned closer to something more reflective and slower. “Slowly We Come” hints at its pace right in the title, finding the producer creating a song that takes its time to move forward, backed by percussive details that reach the intensity of a typewriter at most. This spaciousness allows the sounds to wash over the vocals…here provided by the project’s original vocalist…and underline the reflection hinted at by the synthesizer notes all the more. Listen above.

The partnership between Tokyo’s LLLL and Singapore-born, London-based (last time I checked) artist Yeule has been quite fruitful over the past year. The latter has appeared quite a bit on the prior’s Chains series, adding a sweetness to the often jittery and — sometimes — dark music. It’s a bit of a simplification, but Yeule has given LLLL’s recent music a pop core, an immediate element that adds tension to often shadowy music. “If You Say You Love Me Then Die With Me” finds the two going off in a much, much different direction. It appears on a collaborative album / art book bringing Zoom Lens together with Fakku, an English-language hentai publisher (!), and it is the most left-field number they’ve done yet. The tension is thicker than before — the beat open up like upside-down Pa’s Lam System, but transforms into this rumbling creature accented by cries that would sound welcome on a house track…except here, it sounds like it’s sinking towards the Earth’s core. Yeule adds a familiar humanity to the proceedings, but here she sounds equally off-kilter, moving in time with the beat and helping highlight its oddness, even while giving it a relateable core (building towards the titular request). Listen above.

The latest from Tokyo’s LLLL moves away from clearly identifiable vocals in favor of playing around with the human voice as instrument. “Mahou” is a rumbling number featuring the synthesizers the project has long fancies, the sort that add a sense of melancholy to the track as a whole even when everything drops out for a second. The detail that makes “Mahou” work are the vocal sighs, which add a jittery vibe to the song. Whereas as previous numbers by LLLL have featured more dramatic vocals, the little hiccups here highlight a nervousness — sometimes leaning optimistic — and subtlety. Listen above.