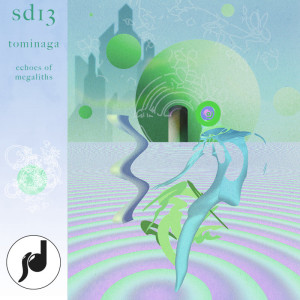 One of my most vivid memories of high school came during video-editing class, when one kid went over to one of the bulbous iMacs we used and fired up Garageband. “Yeah, I make tracks on my computer, every week,” he said. “Love that techno.” He then hit play on a four-on-the-floor beat with a little bit of synthesizer on top.

Roam around the wilds of Bandcamp long enough and you’ll encounter plenty of music not much different from what my classmate was sharing — relatively straightforward, deeply uninspiring electronic music. As wonderful as the Internet has been in allowing great obscure artists to get attention…here I sit, watching people have fun at a Maltine show in New York…it has also made it easier for mediocre to horrible music to take up space, too.

Natsumi Tominaga’s music as just Tominaga does not fall into that category. Her recently released Echos Of Megaliths album via American label Squiggle Dot features a lot of sounds that in the wrong hands could be the only point of interest for the creator — Jungle percussion, colorful synths — but Tominaga has a sense for texture and layering that makes the songs here far more enveloping. A song like “Viewer” moves at a relaxing pace, but a water-soaked layer of vocals adds an air of mystery, while “Graham” draws power from piano twinkles and soaring voices just a little lower in the mix. She’s at her best, though, on longer cuts “Twins In Blue Desert” and “Chatter Of The Strings,” long-players that ebb and change in subtle ways, fascinating throughout. Get it here, or listen below.