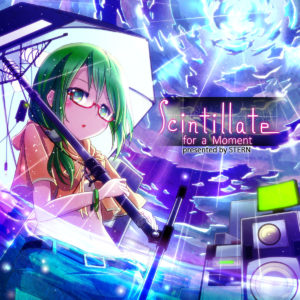 Vocaloid technology sounds best when it is part of a digital maelstrom. Although it feels like the majority of producers fond of the software place it against rock, the best applications of the instrument have all come in electronic music, whether over start-stop patterns or sparser, icier fare. Although envisioned as a replacement for human singing, the real future potential of Vocaloid lies in how well it meshes with digital music. Scintillate For A Moment Presented By STERN is a compilation via Omoide Label merging Vocaloid with the ill-defined “future bass,” but better summed up as contemporary electronic forms — fest-ready EDM, whirlwind sample bops, very very swift numbers defined by hooks centered around sounds rather than voices. Let’s focus on the use of Vocaloid though, which ranges from sliced-up syllables on J4’s “Blue Hawaii” (surrounded by twinkles and, like, every sample you’ve ever heard on SoundCloud ever) to actual singing at least up until the drop (tekaulu’s “Fancy Girl,” gaburyu’s “Gelato Kiss”). Critical to all of them — how well synthesized voices work alongside the music. Get it here, or listen below.