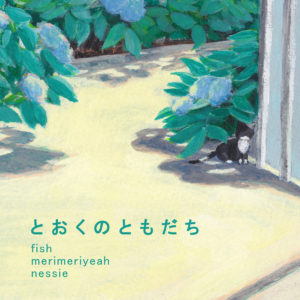 The Tooku No Tomodachi album brings together three indie-rock bands — Fish, Merimeriyeah and Nessie — from a trio of cities — Nagoya, Tokyo and Sapporo, respectively — for an up-tempo set of six songs (uhhhh multiple of three). This is uncomplicated, slightly scuzzy rock at its finest — fast, pretty simple, punctuated by less-than-polished vocals fluctuating between ennui and I-just-wanna-scream-along-to-the-song. Slower moments do pop up, to varying degrees of success — Hokkaido’s Nessie can pull off the waltz vibe on “Umi,” but when Fish give it a shot a little earlier, it isn’t nearly as effective as when they just blast forward without concern. But — save to for Nessie, who work well at mid-tempo — the bulk of this release moves at a breakneck pace. Get it here, or listen below.