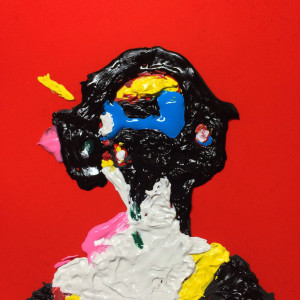 Hoshino Gen had a breakout year in 2015, his single “Sun” racking up millions of YouTube views and exposing the singer (and leader of the band Sakerock) to a huge audience, culminating in him earning a spot on NHK’s Kohaku music show (Hoshino, don’t look at the ratings!). I’ve always thought his music touches on some great sonic ideas…but he always finds a way to immediately bury the goodwill. Take “Sun,” which features a nice enough disco bop and a great swooning section. It also features a chorus he got from a J-pop capsule machine, all momentum-killing and generally lame. I think there is a lot of good to work with…but somebody else should take a scalpel to it.

Kyoto electronic artists and co-founder of the label/party Quantizer Kyoto Toyomu did just that, as he sliced up Gen’s latest album Yellow Dancer and produced an album-worth of new sounds using the sunny J-pop singer’s original material. It doesn’t come off as a mean operation, but rather Toyomu dives in to the album to create something new from it. Some of his experiments yield what amount to (nice!) hip-hop beats, but this stands out for the surprises, such as how his take on “Sun” focuses solely on the second-long electro-distortion opening Gen’s. Elsewhere, he pulls out strobing dance songs and absorbing ambient passages, with a healthy dose of vaporwave touches worked in for good measure. The idea behind it is interesting, but what makes Toyomu’s work shine is how it works as its own thing, able to impress whether you care about Hoshino Gen or not. Listen below, or get it here.