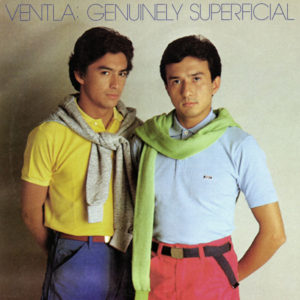 Semi-mysterious producer Ventla set out years ago to release 100 albums featuring instruments all played by Ventla themselves. The resulting releases touched on every style around, from neon-smeared synth-pop to acoustic pop to bedroom exotica. Ventla was getting pretty far and…then just kind of stopped, in 2015. And more or less vanished. When I talked to Keith Rankin at Orange Milk Records — a label that put out a non-100 Ventla album — he told me he had zero idea where Ventla went, but would love to hear more. I think a lot of people fell under the latter.

And then, this week…Ventla just came back! And they didn’t hold back, uploading ten (!) albums of new songs to Bandcamp, which you can get here. I don’t even know where to start, because each deserves to be digested fully. Genuinely Superficial stood out immediately with its slinky electro funk, while Fluffy Yet Moist packs in some oddball pop samples alongside great cover art. Look, more thoughts to come, but for now just dive in here.