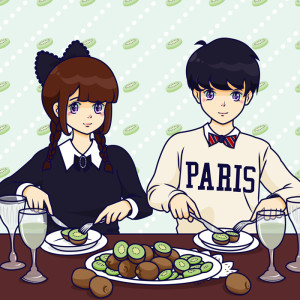 Netlabels in Japan have been a boost in many way to artists across the countries in myriad ways, with one of the clearest being a platform offering a freedom for experimentation. Hard-hitting drum ‘n’ bass smooshed up against anime samples, or Vocaloid gone house…these are some of the “I can’t believe these go so well together!” lightbulbs fostered by the scene. Zoom Lens isn’t based in Japan — it is centered in California, though more focused on the Internet than anything else — has created a similar atmosphere, and remains one of the top imprints anywhere giving shine to Japanese artists. Kiwi is a project between frantic producer AZUpubschool and Osaka pop singer Cor!s, and is another genre-blurring wonder — their Promise EP puts bright, bubbly singing against pinballing electronics, and the combo works.

The title track is the standout, a fidgety composition moving from footwork-ish dash to something a bit more relaxed (with a copious amount of water droplet sounds within). There is no shortage of songs sounding like this in Japan or elsewhere…but the addition of Cor!s takes this from wonky “future” workout to something far more accessible. “GreedGreed” is a bit more upbeat from the start to the finish, but still a demonstration of Kiwi taking something hyperactive and making it a bit more populist via sweet singing. The EP is buffed out by a bunch of remixes, but it is the two original songs that highlight all the charms of Japan’s netlabel culture the most. Listen below, or get it here.

← Soleil Soleil Releases If I Could EP
New Boyish: “Down By The Garden” (Video) →