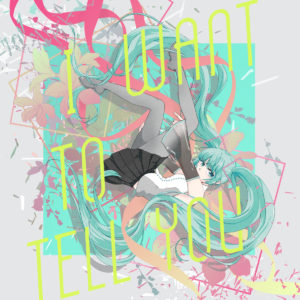 In general, I’m drawn to music utilizing Vocaloid software in an experimental manner, or just pushing it to its digital extreme. Basically, give me a computer voice that sounds like a computer over a computer voice trying to be human. Yuzame Label’s I Want To Tell You isn’t pushing the singing-synthesizer program in any new ways, but rather serves up eight electro-pop numbers starring Hatsune Miku. And they all shine in their own way. The most direct are simply skippy pop number featuring big bright hooks and a lot of synthesizers, such as Ichisei Rupo’s bouncing “Restart” or Mysteka’s rumbling “Vivid,” which sees how airy Miku’s voice can get. Mecanika switches things up, turning “Raw” into a start-stop rev up wherein Miku’s voice is turned into a sonic dressing rather than the focus. It’s the most creative use of her voice here. Meanwhile, Yunomi closes out I Want To Tell You with a song building on his style, offering something a bit more spacious and dramatic (but still featuring traditional instruments), with Miku simply serving as his guest vocalist. Get it here, or listen below.